Saskatoon, Canada—December 2019… When indie-rock trio Close Talker launched its new LP, How Do We Stay Here?, they didn’t want to introduce it with a typical live show. The band wanted people to truly listen to the music, with no distractions, and they sought a fresh approach that would set them apart. The multi-instrumentalist trio of Matt Kopperud, Will Quiring, and Christopher Morien and front-of-house engineer Kellan Thackeray considered a listening party, with the band playing live and the audience  wearing headphones. It was a good start but they wanted to deliver something more—say, an immersive, 3D experience. But how? 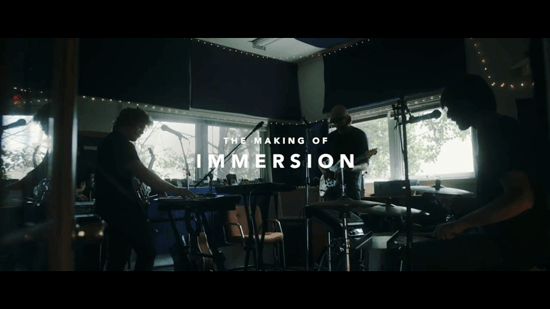 The result of a partnership between French software developer FLUX:: and the French research institute IRCAM, Spat Revolution lets you assign incoming audio to a practically unlimited number of source objects in a virtual space. Each source object has an extensive set of parameters controlling all aspects of the source in the space, including real-time changes in position and much more, enabling the creation of complex, real- time, immersive audio experiences.

Spat Revolution source objects appear in a virtual room and can be assigned to multiple virtual rooms with different acoustic simulations and multiple different output destinations. The results can be delivered in several formats, including as a binaural mix. Spat Revolution also can integrate, locally and over a network, with DAWs, control devices, and real-time tracking systems.

After consulting with Larin, Thackeray and the band realized this meant they could deliver the concert they dreamt of, in which audience members listened on headphones to an immersive binaural mix of the band’s real-time performance. “An ‘immersive binaural mix’ is a nerdy way of saying you’re in the middle of the band, and the instruments are around you, as opposed to shooting at you,” translates Close Talker’s Kopperud. “We learned that it really does add value and depth to the experience. What’s unique about it is our ability to put instruments around your head and not just in fixed positions, and we can move the instruments around your head live, in real time. What’s impressive on the tech end is that we’re able to process 3D movements around the subject in real time without latency. So it’s putting the audience in the center of the music and allowing the music to really engulf them.”

What began as one listening party turned into Close Talker’s trans-Canada “Immersion” tour. Each venue accommodates up to 64 audience members listening on Audio- Technica PRO5X headphones, which are fed by four 16-channel headphone distribution amps. Since delivery is on headphones, “Immersion” concerts can be held in venues that
normally would not accommodate a live show

“The AVID S6L console is processing all of the inputs, and we have two MADI cards in the S6L engine, so the direct outs are patched out to two MADI interfaces that are connected to two Mac mini computers running Spat,” Thackeray reveals. “It’s a fully redundant system: The minis are running in parallel, so if one fails, I can very easily switch to my backup system, which is always following all of my snapshots. The integration of the AVID with Spat Revolution is fantastic.”

In Spat Revolution, Thackeray and Close Talker spatialize the audio streams in two virtual rooms, one binaural and one stereo. Instruments they want to move around and play with are assigned to the binaural room. Kick drum, bass synth, and bass guitar are usually in the stereo room to provide a more traditional impact, although they could be processed in the binaural room for effect. Depending on placement and movement within the virtual rooms, the software generates the appropriate early reflections, clusters and tail from acoustic simulation, creating a sense of depth and reality. The
outputs of the two virtual rooms are then returned to the console, summed, and sent via the left/right main bus to the headphone distribution system. An AVID Pro Tools system handles the recording of every show and enables virtual soundchecks for refining the mixes.

“The artistic intent of making these shows a communal experience, and knowing I had the technology to do this, got me hooked right away on the project,” Thackeray declares. “Like anything new, the question was how it would integrate into the creation- to-delivery workflow. The possibility was given to the band to start creating in their DAW environment, experiment, and prepare some rough spatial mix concepts positioning and setting properties of sources as objects in the virtual space. This was done as they were monitoring in various formats or with different binaural HRTFs.”

The result is a unique and intimate concert experience that achieves everything the band hoped for. “Immersion’ is us trying to create an experience for the audience that’s different from anything they’ve experienced before,” Quiring observes. “This is the most intimate setting we could create to showcase our album exactly as we intended,” agrees Kopperud. “The philosophy of our new album and the philosophy of this project have merged at the perfect time. The whole album is an effort to describe something indescribable. It’s us wrestling of this idea of trying to define what makes something special, special. It would have been easier to just have left this as an idea that we dreamt
up in the van, like, ‘some band should do this someday.’ It’s pretty cool to look back and reflect that we’re that band.”